For many people, a morning is not complete without a cup of coffee – it is only after they have had a good dose of caffeine that they are able to go on with their day. There’s a good reason for that – caffeine. Caffeine is a stimulant that can increase energy levels and decrease fatigue, among other things. If you drink coffee on a regular basis, then you’re probably already aware of those things as you experience them yourselves.

However, have you ever wondered if coffee can be used as a pre-workout? After all, it does improve one’s physical performance. That’s a question we will be trying to answer in the article below.

What Is a Pre-Workout?

Before we go more in-depth about whether coffee is a good pre-workout, let’s take a second to explain what a pre-workout actually is.

To put it simply, pre-workouts are supplements used by bodybuilders, weightlifters and other athletes (and non-athletes) to improve their exercise performance. There are several types of pre-workouts in all kinds of different forms – for example, you can find pre-workout powder or pre-workout tablets.

Why Consider Drinking Coffee Before a Workout

Now, we have partially answered that question already. Coffee contains caffeine, which has been proven to have several benefits for the body, some of which can be helpful when you work out. Below, you will find the most important of them described very briefly:

Of course, there are many other benefits that we haven’t mentioned. For example, it is said that caffeine can help in protecting you against certain neurodegenerative disorders, such as Alzheimer’s or Parkinson’s diseases. Or that it plays a role in improving your heart’s health, although more research is needed.

However, the ones that we mention in bullet points are the ones we should focus on, as they are the answer to why caffeine could even be considered an option for a pre-workout.

In short, coffee is a great pre-workout supplement because it provides you with the energy to do a longer and more intense workout, during which you burn more calories than if you haven’t drunk coffee.

However, now that that’s settled, there’s one more thing that needs to be discussed – when exactly should you drink coffee to make the best of its abilities?

When Should You Drink Coffee?

Just drinking coffee is not enough – you need to know when exactly to drink it so that you can take advantage of all of its benefits. Although many people experience increased energy levels from the very first sip, it takes a bit more than that for caffeine to work itself into your body fully.

Turns out that the perfect time to drink your coffee if you have a workout planned ahead is about 45 minutes before it – that’s when the maximum caffeine concentration hits as your body hasn’t had enough time to process it yet. Mind you, it doesn’t matter what type of coffee you drink and how much caffeine is in it – the timing is the same for all of them.

How Much Coffee Should You Drink Before a Workout?

Now that you know when you have to drink coffee, there’s one more question that needs to be answered – how much coffee should you drink? Would one standard cup of coffee be enough to get you through a workout?

It is believed that an ideal amount of caffeine that should be consumed before a workout is between 0.9 and 2.7 mg per pound of body weight or between 2 and 6 mg per kilogram – although sticking to the lower end will probably work better for you than going with higher doses.

An average cup of coffee has about 100 mg of caffeine. So, how much coffee should you consume depending on your body weight? Let us show you some examples.

Let’s say you weigh 65 kg. In this case, your ideal caffeine intake will fall between 130 and 390 mg. That means that, ideally, you should drink anywhere between 1 and a half to almost 4 cups of coffee.

If, for example, you weigh 120 pounds, then your ideal caffeine intake will fall between 108 and 324 mg – this equals about one to three cups of coffee.

One more example – let’s say that you weigh 300 pounds. In this case, your ideal caffeine consumption would be 270 mg and 1800 mg.

Keep in mind, though, that no matter how much you weigh, one or two cups of coffee before a workout should do you just fine! Especially since you don’t want to drink too much.

And we do have to say this – be careful not to overdo it and drink too much coffee. If your pre-workout coffee is your first or second of the day, then you’re golden. However, if it’s gonna be your fourth or fifth, you might want to reconsider so as not to exceed the daily safe amount, which is about 400 mg of caffeine intake. That’s roughly four cups of brewed coffee.

Keep in mind, however, that caffeine is also present in other things, not only in coffee. For example, you can find caffeine in:

Should you exercise on an empty stomach?

You’ve probably heard about how “exercising on an empty stomach is better” because it can increase fat oxidation. However, truthfully, that’s not actually the case.

In fact, when you work out while fasting, your exercise performance might be affected negatively, and there are several reasons why.

First of all, exercising on an empty stomach can make you feel lethargic due to low blood sugar, which, in turn, can affect your athletic performance – you won’t be able to work out as intensely as after a meal, and you might also be unable to perform some exercises completely.

Eating before a workout is especially important for adults over the age of 55. During the night, our body enters a “break-down state”. If you don’t eat in the morning, your body will stay in that state, and if you start exercising in it, it might lead to muscle loss.

It is best to work out after you have at least a small snack, and then you can have your natural energy booster – black coffee, black tea, or whatever you prefer – before a workout.

Some research suggests that coffee can indeed help with delayed onset muscle soreness – however, more studies are necessary to verify that information.

Can you mix different sources of caffeine?

If you’re asking whether it is safe to, for example, drink both coffee and tea or tea and an energy drink before a workout, the answer is yes. Doing so shouldn’t bring you any harm. Just as we already mentioned, keep in mind not to drink too much caffeine, so less than 400 mg daily.

Can I use caffeine supplementation instead of coffee?

Yes, of course. If for some reason, you don’t like coffee or tea or other sources of caffeine, you can absolutely use supplements instead.

Is coffee a healthy pre-workout?

Yes! As we already mentioned, coffee, and especially caffeine, has plenty of health benefits, many of which can help your physical performance but not only.

If you want to learn more about the health benefits of black coffee, you can check out this article, where we go more in-depth about how good the right amount of coffee can be for you.

Are there any negative effects of using coffee as a pre-workout?

Technically not. That’s because the side effects don’t necessarily come from using coffee as a pre-workout, but more from drinking too much of it, thus exceeding the recommended maximum amount of caffeine. Now that can have a negative effect on how you’re feeling, especially if you exceed that limit regularly.

Some of the common symptoms of too much caffeine include: 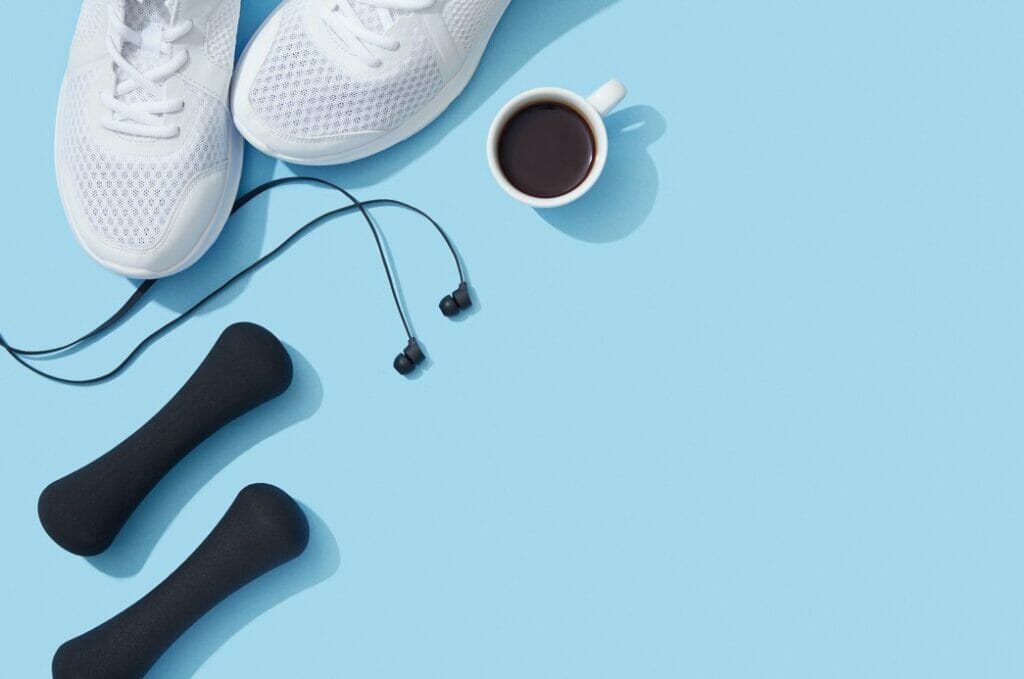 Although we would like to, there will be some days when getting through a workout will be harder than usual – that’s just how our body works. It has better and worse days.

However, if you know that there are some tough workouts ahead of you, a pre-workout might be just what you need. While you can buy pre-workouts in a shop, you don’t have to – you might have what you need for an extra boost right on your kitchen counter.

As we have shown you above, coffee can work just fine as a pre-workout. All because it has caffeine in it, and caffeine ingestion has been known to bring several positive benefits to one’s body, many of which can be very helpful in increasing your athletic performance.

So, next time you’re on your way to the gym to break some sweat, why not give it a go and buy a cup of coffee in a coffee shop? It definitely won’t hurt, and you might find that working out after coffee works better for you than without it. Happy workout!